I Want Your Job finds Torontonians who make a living doing exactly what they love to do, in any field, and for any salary, and asks them how they did it.

Job: Certified Canine Rehabilitation Practitioner
Tracy McKenzie’s patients are always excited to see her. The veterinary technician and manager of Toronto’s Animal Rehabilitation Centre is committed to ensuring that her canine clients—many of whom are recovering from surgery—get a fun-filled workout that facilitates a thorough recovery. The clinic is a veritable puppy-playground, with pooches receiving massages, and getting to run on an underwater treadmill. During our visit, one regular, a scrappy poodle mix named Porto, is so excited to see McKenzie that he promptly pees on the floor.

McKenzie examines a patient with the help of her co-worker, Dalida Savana Negrin.

Some professionals might object to being greeted with urine, but McKenzie doesn’t mind. A life-long animal lover, she used to bring home injured birds and squirrels as a kid and try to nurse them back to health. “When I was young I wanted to be a vet,” she recalls, but she got sidetracked in university and wound up majoring in economics. After graduating, McKenzie worked in mutual funds for four years before her unhappiness with her job led her back to her childhood dream.
Before she completely left the world of mutual funds, McKenzie wanted to be sure that she was committed to working with animals, so she began volunteering at the SPCA and milking cows in her spare time. “At that point I didn’t even know there was such a thing as a vet tech,” she says. “I didn’t want the financial or time commitment of vet school, where I would have had to do a second undergrad. I got really lucky [finding the program].”
The Animal Rehabilitation Centre, which McKenzie joined after it was created by a veterinary surgeon she worked with, caters mainly to dogs, although there are a few feline clients. Yet while McKenzie has her hands full with the recovering canines, she also does double-duty as a therapist of sorts for the pets’ owners. “Owners are freaked out when they need someone to talk to,” she says. “They need a lot of support, and I’m glad we can help people through that time.” 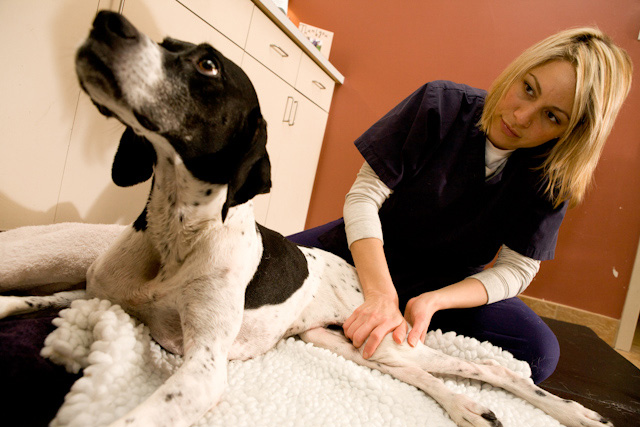 Negrin is certified in canine massage, which can help their recovery process along.

Torontoist: What is animal rehabilitation, and what kind of ailments bring a pet into the clinic?
Tracy McKenzie: It’s such a new field, but there has actually been physical therapy for horses since the 1970s. Animals recovering from surgery often need some sort of physical therapy or they won’t recover successfully. For horses, owners wanted to invest the money into rehabilitating them because they know that they are a commodity. It’s a bit different to want to rehabilitate a pet. This is not the same as human physiotherapy; here we do canine rehabilitation, which involves a lot of therapeutic exercises.
The number one reason dogs come to our clinic is orthopedic surgeries, which usually means torn knees. We also have lots of dogs that are old and have arthritis. The most challenging cases are dogs that have had neurological surgeries; they’ve had the canine equivalent of a stroke, so they often have some level of paralysis.
What are some of the treatments and techniques you use?
Our largest piece of equipment is the underwater treadmill. It removes the weight-bearing element of running and takes stress off of joints, while allowing dogs to exercise for longer and at faster speeds. Roughly ninety per cent of our patients use the tank. We also set up steps [identical to those used in aerobics classes] and ramps to exercise their hind limbs, since a lot of dogs have hind limb weakness; when standing on the ground, most dogs bear sixty per cent of their weight on their front legs.
Any dog that’s lying around after a surgery is going to have atrophied muscles and bone density loss, so joint movement is very important. Sometimes after surgery their brain isn’t aware of where their legs are, so we have exercises that provide stimulus and help regain motor function. We also do exercises to shift their weight, because if a dog has a limb that’s not working, they very quickly stop using it; they’ll just drag it behind them if it helps them move faster. We sort of have to trick them into using it again. 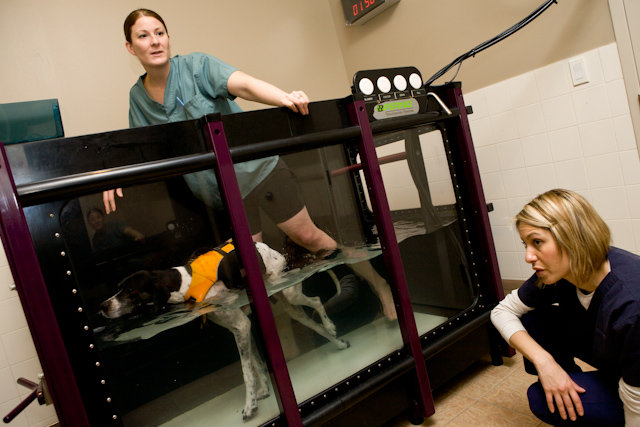 McKenzie, Negrin, and their eager patient demonstrate the underwater treadmill.

Do some owners bring in their dogs just so they can lose weight?
Sometimes. For weight loss, swimming is the best thing: we put a life jacket on the dog and put them in the tank so they can move around. [Ed. The tank is large enough to hold, for example, a full-grown Newfoundland named Bosan, whose owner claims he loves it so much that he charges for it whenever they come to the clinic.] We also have physio-balls that give them a workout, and massages for pain relief and circulation.
How does a dog react to a massage?
They like it! It relieves pain and improves their comfort level.
Is there advice you’d like to give to Toronto dog owners?
Yes. From a very young age, the best thing for a dog is regular, low-impact exercise: basically leash-walking. A lot of people will take their pets to a dog park and let them run, but that’s the equivalent of running a marathon without any conditioning for a human. If they don’t do daily low-impact exercise, they are more prone to injury; it’s like the weekend warrior syndrome. And don’t overfeed your dog, which many people do. Keep them lean.
Photos by Nick Kozak/Torontoist.

CORRECTION: March 24, 2:29 PM We originally identified Dalida Savana Negrin as McKenzie’s assistant; in fact, she is a co-worker. Our sincerest apologies to Negrin.

Dog Rehab Products
In association with &
2021 © InkThemes. All rights reserved