Doggy rehab: Massage, aquatherapy and treats on the menu for Toronto dogs 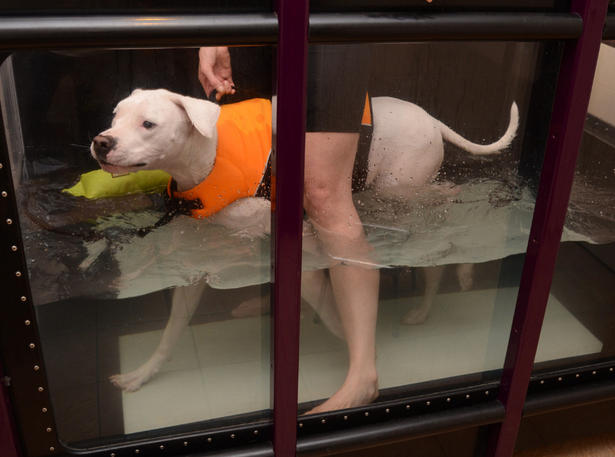 Stitches, a Dogo Argentino, works out in an aquatherapy tub after suffering the canine equivalent of an ACL tear.  (KATE ALLEN/TORONTO STAR)

Maddie is getting on in years. She has arthritis. Her once sprightly gait has been reduced to a shuffle, and her neck is stiff. She can no longer make it up to the second floor of her home.

So on a June afternoon she’s splayed out on a mat while skilled hands massage her vertebrae. The osteopathy session, an alternative therapy in which the body is manipulated to help itself heal, will take the better part of 40 minutes and cost $65. Maddie’s caretaker, Rossi Ayres, says it’s worth every penny.

Maddie is a golden retriever. Like a growing number of dogs in North America, she is undergoing canine rehabilitation therapy, an up-and-coming veterinary field that has spawned at least three new clinics in the GTA since 2004.

“Interest in alternative therapies has grown across the health spectrum,” says Martin Fischer of the College of Veterinarians of Ontario, which in 2009 introduced new rules making it easier for clinics to offer rehabilitation and alternative medicine. “(There’s) no reason to expect pets to be different.”

Maddie’s session at the Canine Wellness Centre in Toronto’s east end begins with muscle strengthening exercises. Canine rehabilitation practitioner Tania Costa drags a length of inflatable tubes to the clinic floor and coaxes Maddie across the challenging terrain with treats.

Costa chooses different therapies depending on the dog and the disorder. In the session before Maddie’s, Molly, a 7-year-old Labrador diagnosed with fused vertebrae and a degenerative joint disease, had her back legs rubbed with a laser light wand. Then the dog jumped into the pool for a run on the underwater treadmill.

Costa is also trained in canine massage and acupressure therapy, among other exercises, and has developed a series of core-strengthening exercises for the stability ball that are gamely demonstrated by her two miniature Australian shepherds, Maisie and Otis. Since opening the clinic in 2004, she’s seen demand quadruple to 13 appointments a day this year.

Across town, in Yorkville’s Animal Rehabilitation Centre, practitioner Tracy McKenzie has witnessed the same trend. That clinic’s client base tripled from their first year, in 2005, to their second year. (The clinic is currently closed and is not accepting patients while it undergoes restructuring.)

According to Statistics Canada, Canadians spending on pets rose from $277 per household in 1999 to $377 in 2005. Americans alone spent $48.35 billion on their pets in 2010, according to the American Pet Products Association — a figure that is more than double the GDP of Estonia. To skeptics, doggy rehab may seem like an exercise in silliness for Westerners with too much cash on their hands.

McKenzie doesn’t see it that way. “The way I look at it, physio for humans after surgery is commonplace,” she said. “(Pet owners are) paying, on average, $5,000 for a surgery. You tack on $400, you’re really just protecting your investment.”

(McKenzie does, however, acknowledge one ridiculous fact about canine therapy: “You can get an MRI for a dog in 12 hours.” For humans, “You could be crippled, and you’re waiting for an MRI for a long time.”)

Costa’s client base is not wealthy and is comprised of mainly middle-income folks, she says. “A lot of people, their kids have left home. They’re empty nesters, and these are their kids now.”

For some canine patients, rehabilitation therapy offers more than just a little increased mobility. Ninja, a 3 ½ year old bichon frise, suffered the equivalent of a stroke two months ago that left him partially paralyzed. Owners Derek Ko and his wife dipped into savings for their future to send Ninja to rehab.

“We knew it was the right thing to do. We can’t imagine our lives without him,” says Ko.

Ninja, in his hour-long session, has his front legs stretched back and forth by McKenzie and even dons a tiny life-jacket for a combined run and swim in the aquatherapy tub.

While Ninja gets his fuzzy coat blow-dried, Ko acknowledges that sometimes the treatment seems to help the dog’s owners as much as the dog.

“Technically, he is property. But he’s family too. You do what you can for family.”

Dog Rehab Products
In association with &
2022 © InkThemes. All rights reserved